The Challenge Behind Building the Covered Bridge at Bavarian Inn Lodge 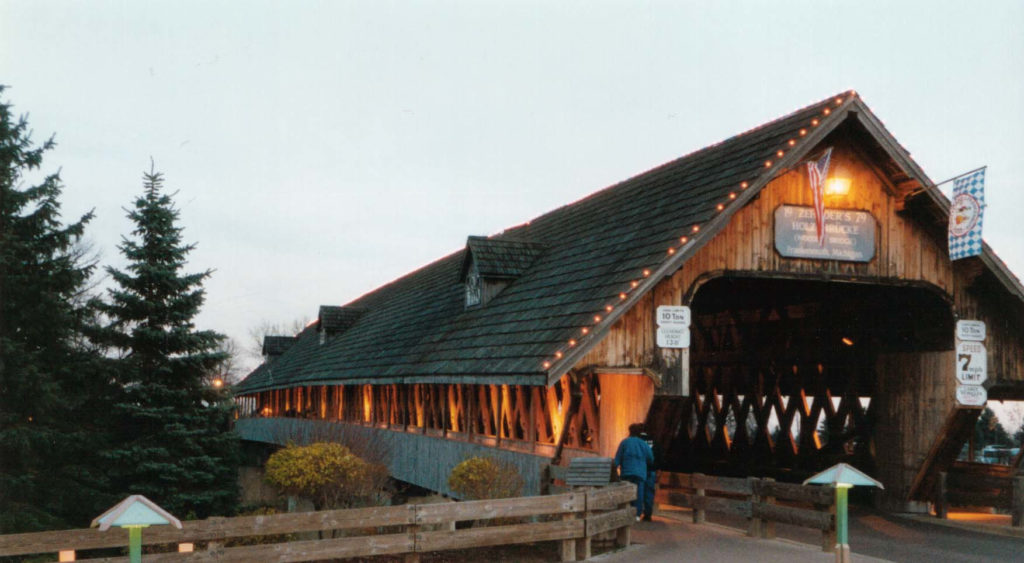 If you’ve never been to Frankenmuth, MI there are many must see shops and sites. One of the most iconic structures in town is the Covered Bridge. Not only does the bridge serve as a landmark of Frankenmuth, but also as a landmark in people’s lives as it’s been the backdrop to countless engagement and wedding photos. After you drive over the quaint bridge you pull up to the Bavarian Inn Lodge, and your vacation has begun.

Bavarian Inn’s Holz-Brücke, German for “wooden bridge,” hearkens back to a bygone era. Although the bridge was completed in 1980, its aesthetic has more in common with designs from the 19th century. However, it’s not just the architecture that speaks to the past, it’s also the hard work and craftsmanship that went into replicating how covered bridges were originally built. 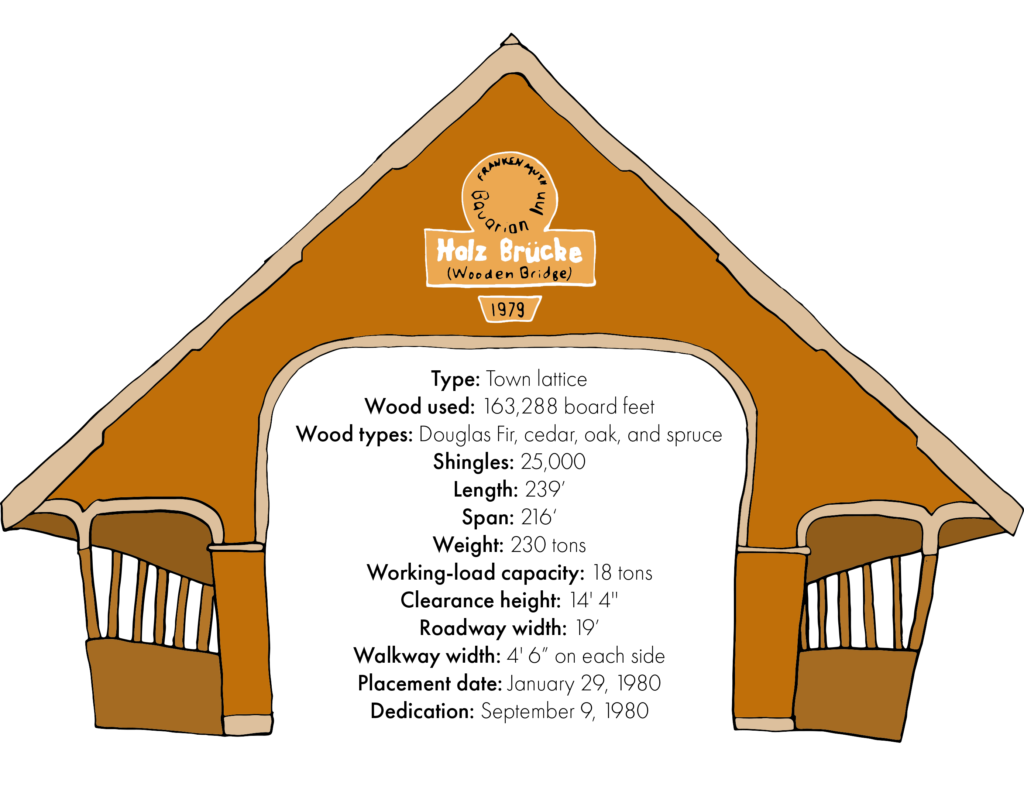 Discussions of a bridge spanning the Cass River began in 1962 between brothers Eddie and William “Tiny” Zehnder Jr., then owners of Zehnder’s of Frankenmuth and Frankenmuth Bavarian Inn Restaurant. A wooden bridge would not only be a tourist attraction but a necessity as the brothers owned property on the other side of the river.

In 1977 WIlliam “Tiny” Zehnder was reading “The Grit” newspaper when he read about Milton Graton, one of the last covered bridge builders. Tiny reached out to him, but Graton was originally not interested as he was located 1,100 miles from Frankenmuth, MI. Eventually Tiny convinced Graton, who lived in New Hampshire, to visit and that meeting sealed the deal. In March of 1978 a contract was signed on lined yellow paper and with a handshake.

Construction of the bridge was no easy feat. The project took over two years to complete and $1.1 million to build. With the help of family members—particularly his son Arnold—Milton Graton began to bring his hand drawn sketches of a three-span town lattice truss bridge to life.

Exactly 163,288 board feet of wood was used—125,000 ft of which was Douglas Fir from Oregon. 100,000 feet were shipped directly to the construction site in Frankenmuth to be air dried, and 25,000 feet went to the Graton’s in New Hampshire to fashion the wooden rafters. Graton delivered these rafters in his 1955 Ford truck.

The construction of the bridge began in the east parking lot across the Cass River and was to be moved over the river once nearly complete. While Graton, his son Arnold, and associates fashioned the woodwork together, concrete and steel workers built an abutment to hold up the bridge.

Once the bridge was nearly complete, a track was built and oak rollers were set in place to transport it. A pair of 4-year-old identical twin oxens, Buck and Bright, were tasked with hauling the bridge over a 12-day period in Jan. 1980. Once the bridge was in place finishing touches were made. 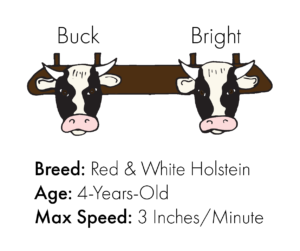 On September 9, 1980, the bridge was formally dedicated. The Zehnders decided to forgo a ribbon cutting and instead went with a timber sawing. Eddie and Tiny Zehnder were the first to chisel away at the wood, and the process was completed by Milton and Arnold Graton. The first to cross the newly dedicated bridge were the twin oxen who moved the bridge across the Cass River.

After 35 years of joint ownership, members of the Zehnder family transferred Zehnder’s of Frankenmuth’s interest in the bridge to the Bavarian Inn in April 2015. By this time, the bridge had endured decades of Michigan seasons and millions of tons of traffic. Soon after the transfer of the property, work began to make restorations to the Holz-Brücke. The Bavarian Inn invested $317,000 into the bridge renovation which included a new cedar shake roof and the replacement of the bridge’s floor boards.

The completion of the newly remodeled bridge was celebrated during the 30th annual Labor Day weekend walk across the bridge with hundreds of locals and guests attending the event.

All the hard work and passion that went into building Bavarian Inn’s Holz-Brücke shows. From the beautiful architecture to the traditional construction, the bridge has brought Frankenmuth together and has established itself as a rich piece of history.

If you’ve never seen our covered bridge in person, a trip to Frankenmuth is always in season. 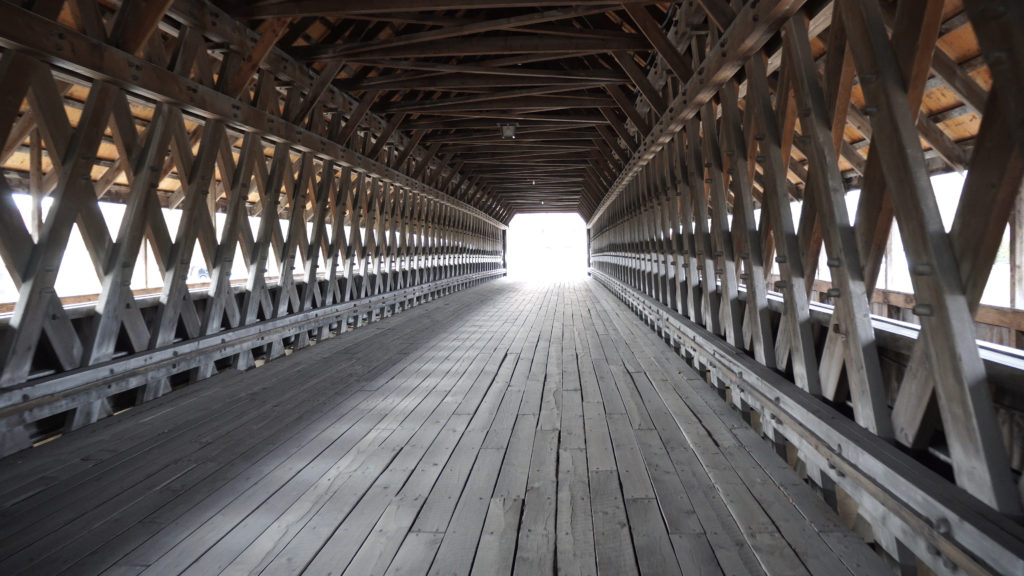