The Bavarian Inn Restaurant was founded as the Union House Hotel in 1888 by Theodore Fischer and renamed “Fischer’s Hotel.” His family continued the business for the next two generations. It was Theodore’s son, Herman and wife, Lydia, who are credited with first promoting “Frankenmuth all-you-can-eat family style chicken dinners.” The couple passed their popular Fischer’s Hotel to their son, Elmer, in 1941. 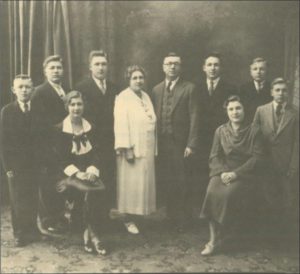 The William & Emilie (Bickel) Zehnder, Sr. Family has been operating Zehnder’s Restaurant since 1928. Son, William Jr, whom everyone called “Tiny”, worked as a farmer. He would stop at Fischer’s to pick up garbage to feed the hogs on his farm. He inquired about the possibility of the Zehnder family purchasing Fischer’s. After a terribly snowy Thanksgiving Day left Elmer Fischer stuck with an oversupply of food and frustration, Elmer was ready to talk. To compound the problem, Zehnder’s had just completed an addition and it was impossible to overlook the long lines of guests who eagerly waited outside to be served there. Elmer had two alternatives-sell or expand. The sale to the Zehnder family was finalized February 4, 1950. 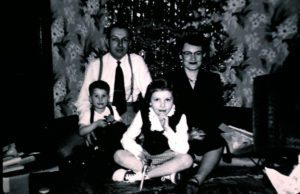 Tiny left farming, and he and his young wife, Dorothy (a former waitress at Fischer’s) became the managers of the new business. Almost immediately they modernized the kitchen, installed dishwashing equipment, built a laundry, and improved the building design. Despite all the improvements, the Zehnder family’s recipe for success went flat. The restaurant lost money in 1956 & 1957. With the country in the midst of a recession, there was talk about closing the restaurant.

After many debates, the family made a courageous decision-to expand Fischer’s, not close it. The expansion gave the restaurant a new viable focus, one that instilled ethnic pride. The new addition boasted an authentic Bavarian exterior-stucco walls, woodcarving, flower boxes and other German accents were blended with the new German entrees served by “Bavarian” costumed servers. A weeklong celebration with German entertainment was held in 1959 which today is known as the Frankenmuth Bavarian Festival. 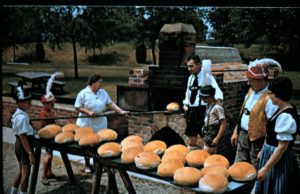 Almost non-stop remodeling and expansion occurred transforming the interior and exterior of the building to the Bavarian theme. In 1967 the stunning 50-foot Glockenspiel was added, topped off with a 35-bell carillon. It became an instant Bavarian Inn landmark with its revolving figures that depict the legend of the Pied Piper of Hameln.

Many Frankenmuth community leaders and residents considered Tiny Zehnder the driving force behind the transformation of their rural agricultural community into “Michigan’s Little Bavaria”. He spent nearly 50 years of his life assisting and encouraging other Frankenmuth businesses to either build or remodel their buildings in the Bavarian style. Due to poor health, Tiny resigned from active management of the Bavarian Inn Restaurant in 2004. He remained Chairman of the Board of Bavarian Inn, Inc. until his death May 23, 2006.

Dorothy Zehnder has been in this building since 1937, when she worked as a waitress at Fischers.  She continues to work 6 days a week at 95+ years of age. Since purchasing the restaurant in 1950, she has routinely worked alongside family and team members. Her motto is “if you don’t feel well, go to work and pretty soon you’ll feel better”. She has personally developed many of the recipes used in the restaurant and has taught thousands of employees the correct method to prepare all of the food that is served in the 12 dining rooms that seat 1200 guests.

3 generations of the Zehnder family now are actively involved in the day-to-day operations of the restaurant. Dorothy is joined by son William A. (Bill), President, his wife, Karen and daughter, Amy Zehnder Grossi, Co-General Managers. Another daughter of Bill and Karen’s, Katie Zehnder, is also a Manager at Frankenmuth River Place Shops. Tiny & Dorothy’s daughter, Judy Zehnder Keller, is President of the Bavarian Inn Lodge. Judy’s son, Michael Zehnder, has joined her as General Manager at the Lodge and her husband, Don Keller, is the Corporate Treasurer. Judy and Don also have one other child involved in the family business – Martha Zehnder Kaczynski who is Vice President of Sales & Marketing at the Bavarian Inn Lodge.

Click Here for a printable version of the complete history of the Restaurant.